On creativity vs talent

I don't think of myself as natively artistically talented.
While I strive to make art that touches somebody else, aside from my masonry restoration projects, I'm not holding my breath.
And yet, I persist in making music, writing, and engaging in other creative expression forms.
The reason is it makes me happy. I find creativity to be a healthy outlet.
For some, creativity might be the fact of raising a family, for example. I can see that. Or whatever other manifestation it takes. No matter the form, I wish upon anyone to lose themselves in creative/artistic pursuits to counteract the turbulence that permeates our world.
Here are some of the art forms I indulge in, although I am not a master in most cases. They are the creative outlets that make me happiest.
The brickwork on this house was in a sorry state before I restored it. 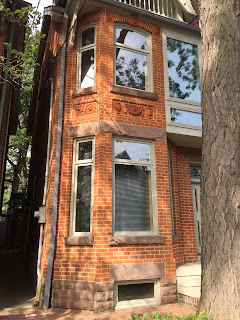 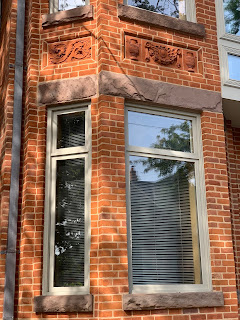 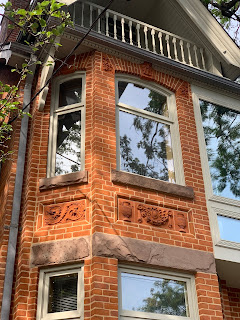 This softcover is my first fiction novel. 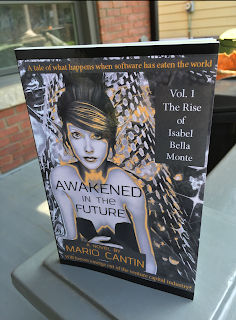 I've designed and partly built a guitar. And I would say it is my best one in terms of playability and (arguably) tone out of a collection of 15 specimens -- most of them high-quality units from Gibson, Fender, Martin, Warwick, and Jackson. 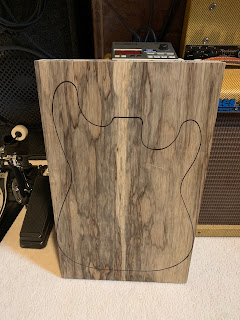 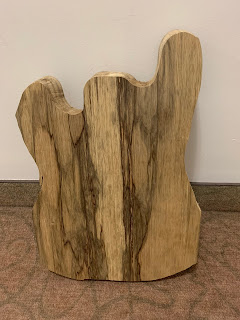 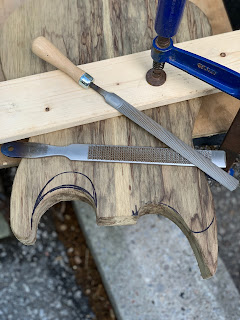 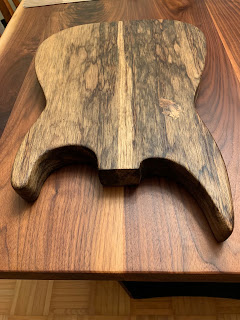 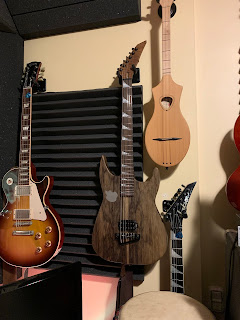 The rest of the pictures show my recording studio, where I am currently writing, recording, mixing, and eventually mastering an upcoming music album. 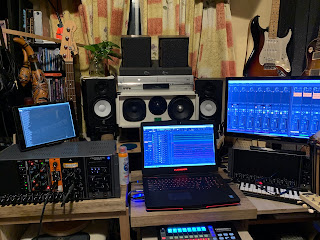 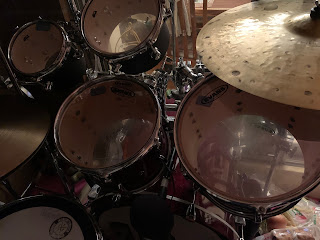 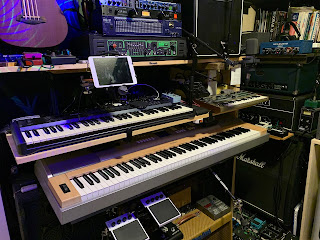 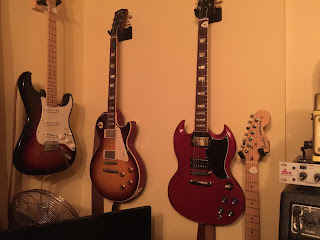 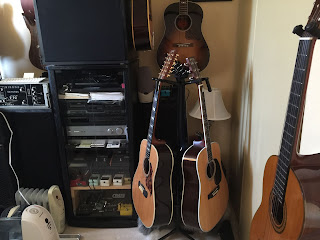 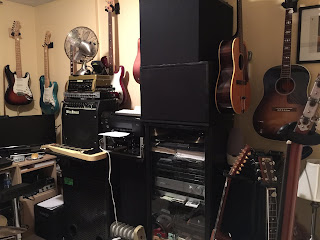 Even though my art won't realistically be the best of its kind in most of these endeavors, it is gradually getting better and better, and it is fostering an inner sense of well-being for me. And that ultimately is why I do it.
Posted by cantin at 7:06 PM No comments:

Awakened in the Future Vol.1 -- The Rise of Isabel Bella Monte is out 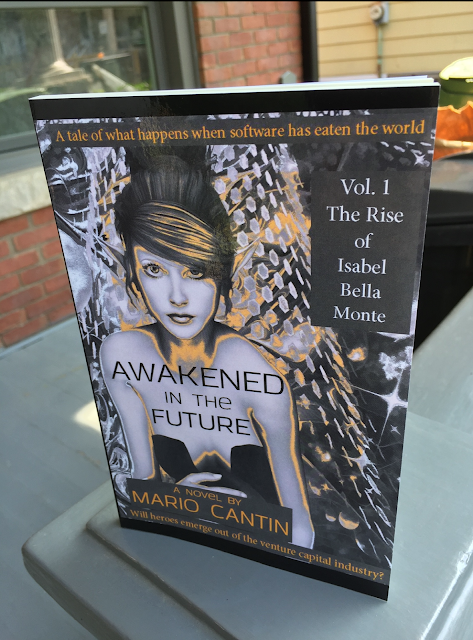 Back in 2016, I set out to write a sci-fi novel about the venture capital industry and the disruptive technological breakthroughs it is fostering -- even though I had no prior experience as a novelist.

Doing a short story or a novella wouldn't have sufficed. No, I had to go straight to the novel to satisfy my ego.

To add to the hubris, over the course of figuring out how to actually be a writer, I decided to dispense altogether with any and all professional services which might help me produce a more polished finished product. As a consequence, I did all the research, writing and editing on my own, and self-published through an online service. I've even designed the cover myself.

As you can imagine, the odds of producing a quality book weren't all that high, given my lack of credentials in every aspect of the task. My list of items to get right included: a good story written well-enough within reason, compelling characters, a killer social commentary, and an insider's look at the VC industry that tended to elicit various conclusions on the part of the reader.

In order to prevent spending many thousands of hours writing a book without knowing what the reception would be, I broke down the story into parts and only wrote the first volume, reducing the workload to a more manageable 45,700 words. That still took well over 1,000 hours.

Although I completed the final draft some months ago, I let it simmer for a while as I waited for a trusted friend of mine who enjoys prominence within the venture capital industry to give me his unvarnished opinion. In the meanwhile, I've read and re-read my work so as to try and catch as many typos as I could before commissioning the printing a very small run of softcover copies.

Today, I have finally received the feedback I had been coveting for what seemed to be so long. It's one thing to have an opinion about one's work, but getting an external assessment from the right individual(s) is crucial in order to achieve a sense of perspective, as I have discovered for myself.

So what's the verdict?

Well, based on that single piece of feedback from my venture capitalist and avid reader friend (which I give much weight to), although there are rough edges in my writing -- which was graciously attributed to the fact that it's my first book after all -- it would appear that I have checked out all the boxes on my list of what I had largely hoped to achieve.

Apparently, the book "is dynamite" and I have produced "spectacular near term sci-fi with a 500-year jump!" My friend goes on to say that "The characters are fun, the plot is strong and the social commentary is right on the money for this moment in time." He mentions also having enjoyed the boatload of Easter eggs I have sprinkled throughout the story.

If you have somehow stumbled upon this blog and are interested in checking my novel out, here is the link to buy the e-book version from your favorite store (Apple, Kindle, Barnes & Noble, etc.): http://books2read.com/awakenedinthefuture

You can also read it for free if you'd be so kind as to take the time to send me your impressions after you've finished it. It doesn't have to be a long deal, just the key points such as the bits that are the most jarring to you, as well as what you think are the gems, if any.  If that interests you, please DM me on Twitter: @mariocantin
Posted by cantin at 6:47 PM No comments:

Getting to the why behind the Golden Rule

We’ve all heard the Golden Rule in one form or another. But as with all overly idealistic admonitions, we all too often end up merely pay lip service to it, don’t we?

What if instead we worked out why such a rule is in our best interest to follow? In other words, I’m suggesting resorting to the good old “What’s in it for me?” framework.

Lately, I was having one of my occasional “excogitations” — aka mental meanderings — as I was reflecting on some basics of interpersonal relationships.

A few days prior, someone had accidentally (and unknowingly) overpaid me for a transaction. As a matter of course, I immediately contacted them and arranged to return the superfluous funds, which as you would expect, earned me some thank you’s for my honesty, etc.

For example, it could be out of religious belief. However, it’s not personally my cup of tea.

Up until now, I would have told you that I did it because I believe in Karma. I wrote about it way back here.

But such reasoning is arguably still hinging on a belief system, rather than facts.

What would constitute a logical reason for treating others as one would wish to be treated by said others?

So in my recent moment of mental clarity, I came to the conclusion that, since no one can ultimately lie to themselves, treating others justly earns one respect and trust in their own self. If I’m to be my own best friend, I want to know at a deep level that I respect and trust myself. If I genuinely treat others like I would like to be treated, even when they wouldn’t know any better either way, I personally would know that I am this person, and that’s all that would matter.

At that point, I would basically be doing it because my good opinion of myself, being one of my most valuable assets, is what I would want to protect for the gem that it is.
Posted by cantin at 8:47 PM No comments: